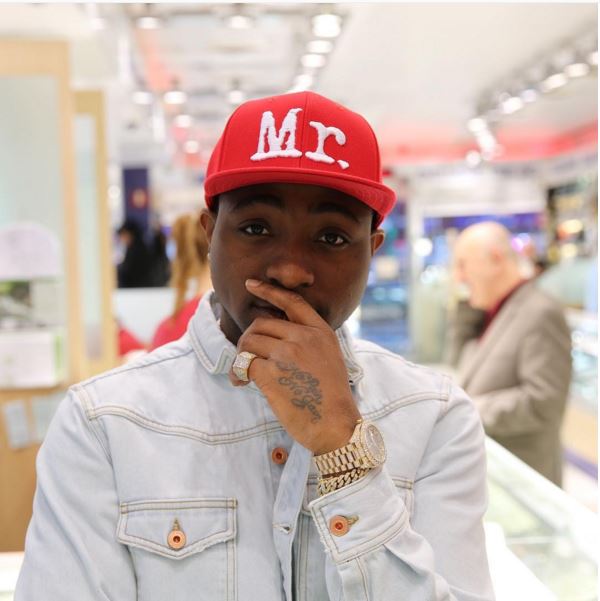 David Adedeji Adeleke (born November 21, 1992), better known by his stage name Davido, is an American-born Nigerian recording artist, performer and record producer. His 2011 single “Dami Duro” was well-received throughout Nigeria. Along with his elder brother Adewale Adeleke, Davido is the co-owner of HKN Music (a record label home to Sina Rambo, B. Red and DeeKay). He has produced songs for Naeto C, Skales, Tiwa Savage and Sauce Kid. In April 2012, he signed an endorsement deal with MTN Nigeria. On October 23, 2013, Davido partnered with Guinness Nigeria for the “Guinness World of More” concert.

Born in Atlanta, Georgia, Davido relocated to Lagos at a young age. His debut album Omo Baba Olowo, released in 2012, was supported by the singles “Back When” featuring Naeto C, “Dami Duro”, “All of You”, “Overseas” featuring Sina Rambo, “Ekuro”, “Gbon Gbon” and “Feel Alright” featuring Ice Prince. Between 2013 and 2015, Davido released the singles “Gobe”, “One of a Kind”, “Skelewu”, “Aye”, “Tchelete (Goodlife)”, “Naughty”, “Owo Ni Koko”, “The Sound” and “The Money”. The aforementioned singles were reportedly intended to be singles off the album, The Baddest.

In January 2016, Davido announced via Twitter that he signed a record deal with Sony Music. His announcement was met with mixed reactions. The record label put out a press release to confirm the deal. Davido started his own label, Davido Music Worldwide (DMW), few months after signing with Sony. Dremo and Mayorkun are currently signed to the label. In July 2016, Davido signed a record deal with Sony’s RCA Records.

I’ve been doing music for like 1 year but I took it seriously in March 2011. I was formerly in a group called KB international in America. It wasn’t working out so I thought I should just do this on my own that was when I moved back to Nigeria. I was around people that were musically inclined. I love music, and why not do something you love and are happy doing and making money at the same time.
“
”

-Davido, on his decision to venture into music

Davido was born on November 21, 1992, to Chief Deji and Vero Adeleke in Atlanta, Georgia. His father is a Nigerian business magnate and his late mother was a university lecturer. He attended the British International School in Lagos. Davido studied Business Administration at Oakwood University prior to relocating to Nigeria. Davido’s interest in music started during his time at Oakwood University. He bought musical equipments and started making beats, in addition to recording vocal references. He dropped out of Oakwood University when he started getting bad grades and relocated to London, where he focused more of his energy towards vocals as opposed to production. When Davido returned to Nigeria in 2011, his music career was sidelined after he agreed to honor his father by enrolling at Babcock University. In July 2015, Davido earned a music degree from Babcock after his father paid the university to erect a music department for an inaugural class of one.

Work on Davido’s debut studio album, Omo Baba Olowo, began in 2011. On May 7, 2011, Davido produced and released his first musical recording “Back When”. The song served as the album’s lead single and received frequent airplay. The music video for the single, uploaded onto YouTube on May 9, 2011, was shot and directed in Nigeria by Clarence Peters.Davido told Factory 78 TV that he recorded “Back When” in London. Davido co-produced “Dami Duro” with Shizzi and released it on October 30, 2011. The music video for “Dami Duro” was released on January 8, 2012. It was shot and directed in Lagos by Clarence Peters, and was released during the Occupy Nigeria protests. In an interview posted on NotJustOk, Davido spoke on the release and composition of “Dami Duro”. He said he recorded “Dami Duro” in August 2011. Three months later, the song got leaked after he sent it out to some friends. On May 6, 2012, HKN Music released “Overseas” as a single off the album. The unfinished version of the song leaked prior to the official release. On September 28, 2012, HKN Music released the music video for “All of You”. The song was produced by Gospelondabeat. In an interview with Factory 78 TV, Davido said he recorded the song with Gospel after meeting him at a mall. To further promote the album, Davido released music videos for “Ekuro”, “Gbon Gbon”, and “Feel Alright”.

In early 2013, Davido began recording his second studio album. On February 25, 2013, he released “Gobe” as the upcoming album’s lead single. The song was produced by Shizzi. Charles Mgbolu of Vanguard commented on the release of the single, saying: “It’s a beautiful song with a tremendous video running along. In Gobe, Davido is beaten up by thugs after winning the girl. It’s a song that exudes fun from start to finish.” The music video for the single was shot in South Africa by Godfather Productions. The song was ranked second on Premium Times list of the Top 10 songs of 2013.

Davido announced via Twitter that the second single “One of a Kind”, from the upcoming album, would be released on May 13, 2013. The song was also produced by the aforementioned in-house producer. The music video for “One of a Kind” was shot and directed in South Africa by Tebza of Godfather Productions. It visualizes a united Africa rich in culture and music.

“Skelewu”, the third single from the upcoming album, was released on August 13, 2013. It was ranked 5th on the aforementioned list of the top 10 songs of 2013. The song peaked at number 1 on Afribiz’s Top 100 chart. A dance competition with a cash prize of $3000 (₦480,000) was announced days after the release of the song. Davido uploaded an instructional dance video onto YouTube and asked fans to upload videos of themselves dancing to “Skelewu”. On October 10, 2013, Davido declared Bello Moshood Abiola the winner of the competition. A week after announcing the winner of the Skelewu dance competition, a Sesan directed music video was released to the public. Shortly after the release of the video, Davido took to Twitter to debunk the video and said that someone betrayed him by releasing it. He also said he’ll re-shoot the video with Moe Musa, a UK based music video director. Sesan commented on the release of the music video and said that Davido was satisfied with his contributions to the music video. He also said that it would be immature for Davido and his management to release inaccurate statements in order to defame his brand. On October 21, 2013, the official music video for the single was shot and directed in London by Moe Musa. It was uploaded onto YouTube at a total length of 3 minutes and 56 seconds.

On February 2, 2014, Davido released “Aye” as the fourth single from the upcoming album. The song was produced by T Spice. The music video for “Aye” was released on February 7, 2014, and was directed by Clarence Peters. According to the music video’s synopsis, “Davido plays a poor farmer who falls in love with the prince’s love interest.” On April 30, 2014, HKN Music released the upcoming album’s fifth single “Tchelete (Goodlife)” featuring South African duo Mafikizolo. The song, which translates to “Money”, was produced by Oskido and Shizzi. Upon its release, the song was distributed by MTN’s Play and Callertunez platforms. The collaboration between Davido and Mafikizolo came about as a result of them networking at MTN Nigeria’s Elite Night event in December 2013. The music video for the song was shot and directed in South Africa. It was uploaded onto YouTube on May 1, 2014. Oskido and Uhuru made cameo appearances in the video.

In June 2014, Davido collaborated with Mi Casa, Lola Rae, Sarkodie, Diamond Platnumz and Tiwa Savage on a song for DSTV’s Africa Rising campaign, which was designed to inspire Africans to partake in community-based social investment projects. The music video for the song, released on June 24, 2014, was shot and directed by South African production house Callback Dream. The aforementioned artists performed the song at the Africa Rising launch ceremony in Mauritius. In July 2014, Davido told The New Age newspaper that he plans on collaborating with American rappers Rick Ross and Meek Mill. In June 2015, Davido dropped his long-awaited collaboration with Meek Mill titled “Fans Mi”.

On April 6, 2012, Nigerian Entertainment Today reported that Davido signed a ₦30 million endorsement deal with MTN. The deal unveiled him as the face of MTN Pulse, a marketing campaign for Nigerian youths. On October 24, 2013, Pulse reported that Guinness Nigeria signed Davido to an endorsement deal. As part of the deal, Davido performed at the Guinness World of More Concert alongside P-Square, D’banj, Wizkid, Ice Prince, Burna Boy, Olamide, Phyno, Chidinma, Waje and Tiwa Savage, among others.

In May 2014, Davido attacked the Nigerian Immigration Service (NIS) after missing his flight to London. He accused them of pestering him for money. On May 11, 2014, the Public Relations Officer for the NIS denied Davido’s allegations and said that they didn’t issue him an exit permit because he didn’t have the proper travel documents with him at the time.

In December 2015, the Vanguard reported that Davido and his baby’s mother, Sophia Momodu, were embroiled in a fight over the custody of their daughter Imade Adeleke. The newspaper reported that it all started after Sophie and her family filed a petition against Davido and his family for alleged child trafficking. In a petition sent to the Director-General of the National Agency for the Prohibition of Trafficking in Persons, Davido and his family were accused of keeping Imade away from her mother, as well as trying to flee Nigeria with the baby. Davido has since insisted that the allegations against him are false, but apologized to Dele Momodu, the cousin of Sophia Momodu.

Main article: List of awards and nominations received by Davido

As of December 2014, Davido has received a total of 29 awards from 74 nominations. He is the recipient of a BET Award, a Kora Award, a Channel O Music Video Award, a Ghana Music Award, a Nigeria Music Video Award, 2 MTV Africa Music Awards, 2 African Muzik Magazine Awards, 5 The Headies Awards, 7 Nigeria Entertainment Awards and 2 Dynamix All Youth Awards.